CLOUD COMPUTING: Past, Present and Yet to Come

CLOUD COMPUTING: Past, Present and Yet to Come 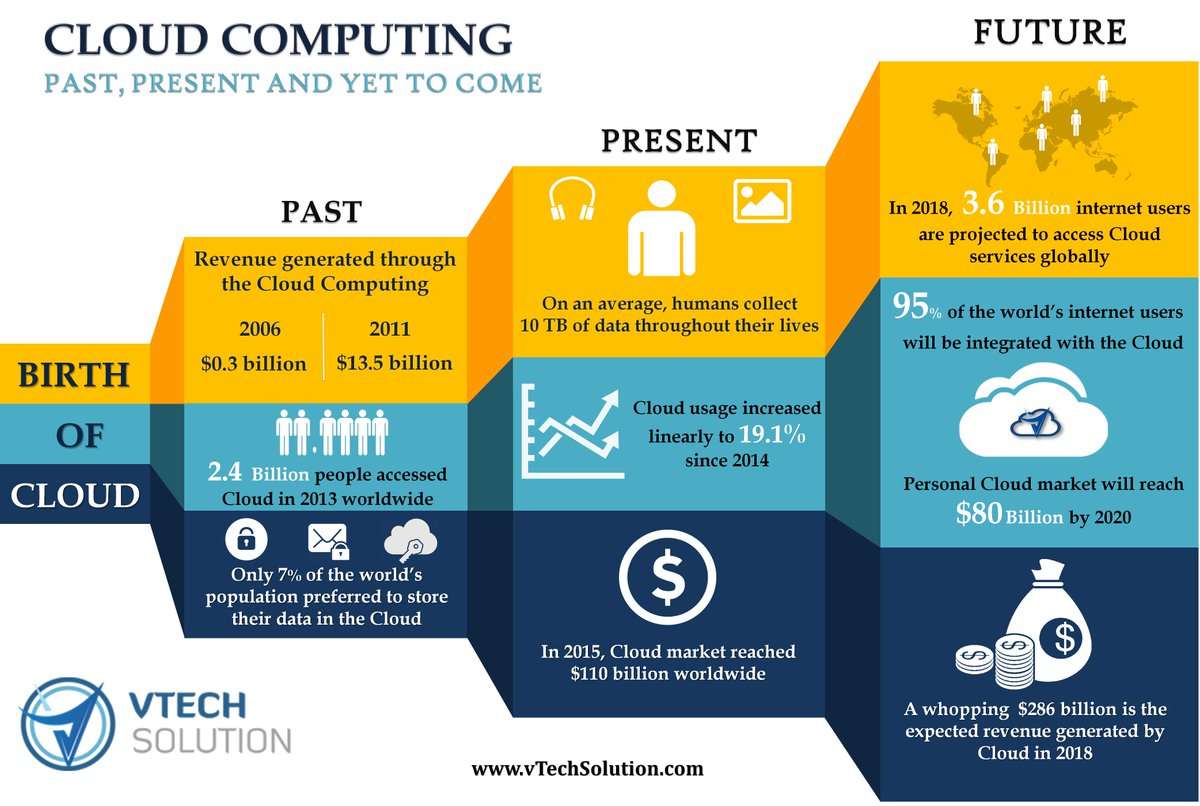 Cloud – Let’s take a look at the inception of the 21st century, the time, when these five enigmatic letters came to existence in terms of computing. While people were struggling to find a way to manage their data and store it in a secure place, Dot-Com anticipated and placed their bets on a fully wireless data storage system – now called the mighty ‘CLOUD’.

So what is Cloud in concept? According to the definition, Cloud Computing is an Internet-based computing that helps in processing shared resources and data on demand. It lets you leverage a shared pool of configurable computing resources like networks, servers, storage, applications, etc. Thus, making cloud a place where all your information: personal or public, confidential or open, can be stored, processed and managed over the internet rather than on your personal systems and can be accessed whenever and wherever required.  In the present era, we use every bit of information at one place or the other. With the pace our lives digitalizing by the day, it is estimated that a normal human life worth of digital data probably accounts up to 10 terabytes.

In order to make things better and more digitalized, Amazon entered the real working part of cloud computing, now called the Amazon Web Services. It is their cloud service for the use of public. What changed since then? Back when AWS was started, Amazon’s cloud based revenue was close to 300 million dollars. This is because people have had hard times accepting the magical world of data going invisible.

Several players have joined the league ever since. Cloud computing scaled heights with respect to revenue: from $0.3B in 2006 to $13.5B in 2011. This further increased the acceptance for this technology. Even then in the year 2011, only 40-50% of the US population practised the use of cloud computing. The question arose – Why so few? When everything seemed so ideal, why is every person and every company not making use of this absolute advantage? The answer was simple – ‘Security concerns’. Not everyone was comfortable in storing their private data, let alone financial details, in a virtual server or a place that they are uncertain of.

In order to obviate this, Cloud service providers began to enhance various aspects of cloud services, the most significant being Cloud Security. This new improvement thus brought about a greater hike in cloud revenue. Soon, in 2013, more than 50% of the world’s population were using Private and Public cloud services. This number kept increasing with new competitors entering the cloud computing field. Statistics for ‘revenue produced’ through Cloud computing showed a linear increase par for the course of about 19.1% every year in a period of 2014-2016.

In the year 2015, cloud market nearly reached $50B! A report by Forbes even state that cloud applications used about 81% of the mobile data last year. Now that’s a gigantic figure, right? What is more humongous? Predictions for ‘yet to come’ cloud revenue.

In 2018, revenue generated through cloud is expected to account to a spiffy $286B! It is believed that cloud applications will use about 90% of mobile data and almost 70-80% of the world will be completely integrated with cloud services.

How do we know that this number is even relevant or trustworthy? Well, to corroborate with the facts, I would conclude saying that we all are in a cloud – the internet on which you are reading this article, is a cloud, per se. It’s time to forget the tangled wires and the notifications of your computer showing ‘LOW MEMORY’. “Hard disk was old school, Cloud is the new cool”.