10 Ways in Which Cybercrime Is Changing

10 Ways in Which Cybercrime Is Changing 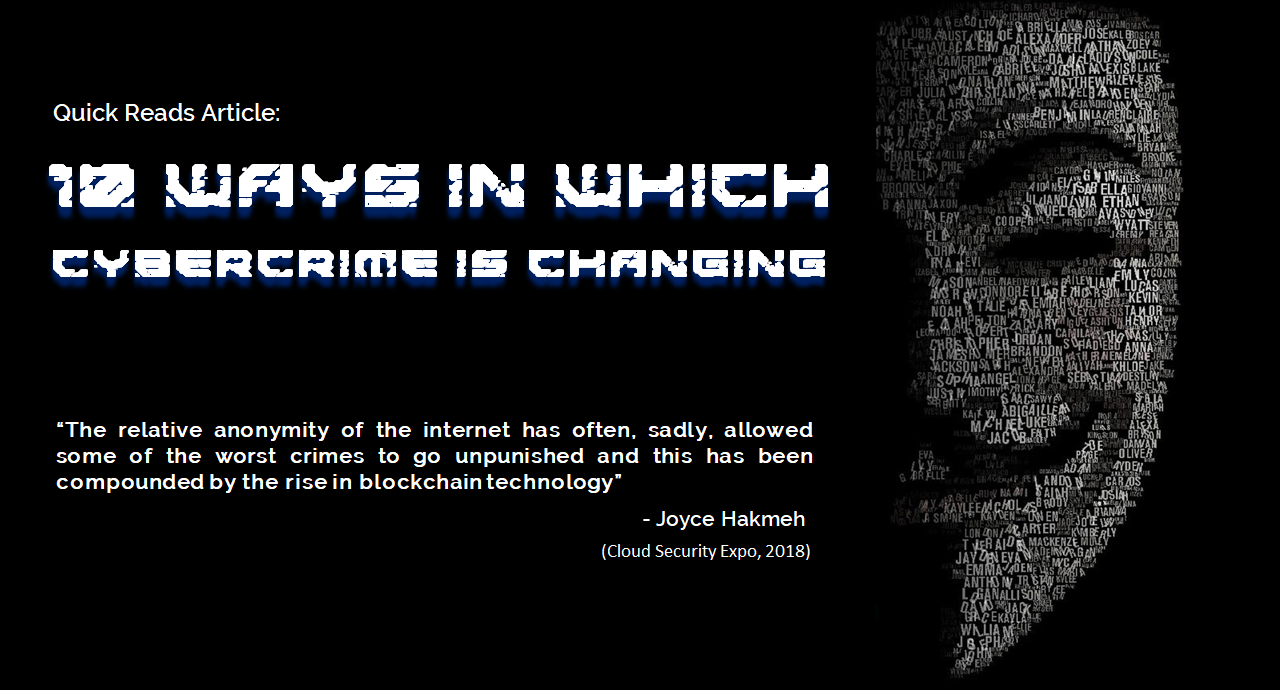 Human being is a social animal and tends to socialize by interacting and sharing with other beings. Although people enjoy sharing they also seek and cherish their right to privacy; they prefer less to no invasion of the same. Nowadays, we have become quite desensitized to news like data breaches, cyber-attacks, phishing, and logic bombs. ‘Cybercrime’ is no more a new buzzword, but an accepted reality. People are becoming more and more tolerant about the same which in itself is a threat. Cybercrime is changing, it’s adapting to become more effective than its countermeasures, it’s important to understand the shift in this Cybercrime Paradigm, to stay ahead of the curve.

Ways in Which Cybercrime Is Changing

Investigations into the dark web illegal trading have revealed that most traders involved in the act had little or no prior records. Many Individuals involved directly or indirectly in the cyber felonies are often new to the dark web, and unlikely to have a previous felony or even a misdemeanor history. In 2017 a study by Alec Fullerton showed that many students across campuses started turning to the dark web for buying and selling of drugs and narcotics.

Cybercriminals are evolving their phishing techniques and are using more targeted approach to lure their preys in handing over sensitive and compromisable information. They do not rely anymore on the basic tactics for social engineering like made-up & misspelled URLs, or Nigerian Princes’ leaving the inheritance to us. They now do a deep research on the target victim and use advance Malware and Trojans to get their information, including sensitive data like social security numbers, insurance details and banking credentials.

The Rise Of Hacktivists And Cyber Vigilantes

Cyber vigilantes are standing up against cybercriminals and scammers trying to bring them to justice in their own ways, like scam baiting, public shaming, DDoS attacks, etc. Whereas,  ‘Hacktivists’, a blend of hacking and activism, target government agencies to paralyze them, release compromisable data in the cyberspace, as a protest against them for a political or social cause. Efforts of cyber vigilantism & hacktivism are expected to significantly increase in the next few years.  While debating the moral cause behind hacktivism and vigilantism remains a separate discussion, the fact still remains that these intrusions often put cybersecurity at risk and may even jeopardize the security of the whole nation itself.

Fighting Cyber Crime is Getting Harder

Difficulty in bringing justice to Cybercrimes

Determining the level of the penalty based on a cybercrime is a challenge in itself; there is a lack of a universal cybercrime law structure that helps levy penalties, fines and jail time. Considering the fact that cybercrimes are often global, it is certainly a challenge to track and bring justice to a hacker on the opposite side of the world as there no cyber-borders between countries.

A Rise in Organized Cybercrime

A vast majority of data breaches are often a result of organized crime. Cybergangs have been more disciplined in their crime lately and are now being referred to as organized crime syndicates and groups. In the past 30 years, cybercrime has evolved from what was an orthodox structure to a modern and more organized style of selling – “Fraud as a Service” (FaaS). Many Hacker groups are now so sophisticated that they are at par with many states in their capabilities in system intrusion and penetration.

Ease Of Payment For Cybercrimes

Cryptocurrency and internet money has enabled a whole new world of anonymous payments without a paper trail. Payments in cash and kind often leave an array of breadcrumbs for authorities to sniff, even after being extremely careful.  Collecting, storing or laundering money from criminal proceedings is a challenge that many convicts have failed at. However, with the introduction of cryptocurrencies like Bitcoin, hackers are now more motivated to commit cybercrimes with a belief that they will remain incognito. Cryptocurrencies are anonymous and unregulated which makes the transactions easy for cybercriminals and thus, can do so hiding in plain sight.

A Massive increase in Digital Sphere

Use of digital technologies has rapidly increased around the globe and is still on the rise. Everyone and every device connected to the internet is a potential target for cybercrimes. A direct correlation can be observed with rise in Internet of Things (IoT) devices and ease of cybercrime. For example, in 2016 Mirai Botnet attacked the insecure IoT and left much of the internet inaccessible on the US east coast. As the digital sphere has increased, the opportunity for cybercrime has also increased to a great extent.

In recent years, State-sponsored cyber-attacks have increased dramatically; building cyber-armies and cyber defense capabilities have become a quintessential national security strategy. More than 20 countries display impressive offensive & defensive cyber capabilities. For example, in 2015, US alleged China breached several databases of the US Office of Personnel Management, stealing Social Security Numbers of more than 21 million people interviewed for government background checks. In 2014, North Korea attacked Sony Pictures Entertainment, and stole gigabytes of data and later posted the compromised data online. The most recent was that of the alleged politically-motivated ‘NotPetya malware’ attack against Ukraine by Russia in 2016. The world of cybercrime is changing dynamically with cyber proxy wars among nations.

Recent cyber-attacks have been exceptionally bad to companies, incurring hundreds of millions of dollars in losses. Still, governments around the globe haven’t made great strides in securing digital assets of their citizens. It almost seems like cybersecurity has been put on the backburner by some governments while prioritizing other tasks. Not considering cybersecurity to be a national issue could potentially be devastating a strategy.

Along with the changing world, the nature of crimes has also transformed and become virtual.  Acts of stealing, extorting, blackmail, illegal trading, etc. have now become, hacking, ransomware, online blackmailing and dark web trading. There is a great need be secure in this virtually threatening world, cybersecurity best practices should be a top priority for any Individual or firm, to secure and maintain their digital assets.

“As the world is increasingly interconnected, everyone shares the responsibility of securing the cyberspace.”
― Newton Lee, Counterterrorism and Cybersecurity

The white paper provides Cyber Security insights that are a must-know for all small to mid-size business. It describes the current trends in cyber security do’s & don’ts and security scenarios. Learn how to protect your computers, networks, programs, and data from unauthorized access or attacks that are aimed for exploitation.